Cold Laser Therapy, also known as Low Level Laser Therapy (LLLT) has been researched and studied since the late 1960’s.  The highly amplified and focused light energy at a specific wavelength promotes the process of photobiostimulation.  The resulting photochemical reaction produces an increase in the cellular metabolic rate. After over 40 plus years of testing, and over 2,000 papers published on it, Cold Laser Therapy has been shown to aid in regenerating damaged tissue, decreasing inflammation, relieving pain and boosting the immune system. Professional athletes rely upon Cold Laser Therapy to treat their sports-related injuries. These guys use this remarkable therapy for one reason only…It promotes rapid healing of the injured tissues.

In 2002, one of the first cold lasers cleared by the FDA was utilized in a landmark double blind study conducted with General Motors.  At the time, General Motors had serious challenges with Carpal Tunnel Syndrome among its workers.  GM decided to conduct the study to see if non-invasive Cold Laser Therapy would help.  Among the afflicted workers who entered the program, those treated with Cold Laser Therapy demonstrated significant improvement in grip strength and range of motion compared to other workers who were treated with placebo lasers.  A similar double-blind study was conducted in 1998 at a prominent medical school in Houston.  The researchers concluded that there was a 70% improvement among patients receiving Cold Laser Therapy.

After the study was completed with GM in 2002 and the FDA cleared the laser for clinical use, Dr. Randall Roth received training in its proper use and application.  At the time, he was practicing in Plano, Texas.  In 2009, he decided to bring the laser technology and his experience to the Hot Springs area.  Since he obtained his first cold laser in 2002, Dr. Roth has provided thousands of treatments to patients for a variety of conditions.

Cold Laser Therapy is highly effective for many other musculoskeletal conditions, including shoulder, hip, back, and neck pain to mention a few.  At Health 1st Wellness & Physical Medicine, Dr. Roth developed a proprietary knee pain protocol utilizing Cold Laser Therapy as a central component of the program. This unique knee treatment program has helped hundreds of patients get out of pain and avoid knee replacement. 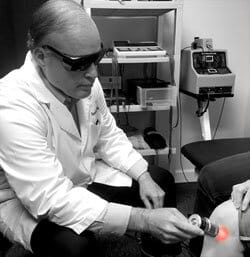