What is Degenerative Disc Disease? 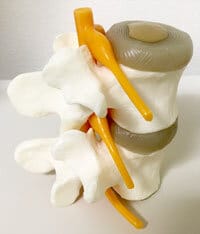 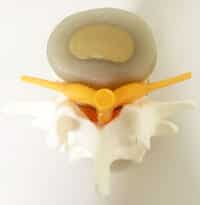 First of all, we need to understand what a normal, healthy disc looks like. Look at the picture of the plastic model demonstrating how healthy discs should look.  A healthy disc is going to have a nice, thick layer to it.  There's going to be a lot of space between the two vertebrae.  If the disc is well hydrated like it should be, it will be thick.

When we look at a disc on end, we can see the two components to a normal disc.  There is what is called the nucleus pulposus, which is like a jelly material in the center of the disc.  It should be contained right in the middle of the disc.  The outer component is called the annulus fibrosis.  When a disc is working like it should, the disc is very flexible, very pliable, and serves as a shock absorber. 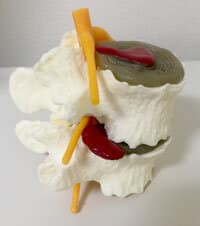 Disc degeneration happens to generally everybody as they age.  Most people will get degeneration if they live long enough.  Sometimes it will happen in young people, depending on their lifestyles and traumas that may have occurred.  Now, let's take a look at a degenerated disc and compare it to the healthy disc we previously discussed.  A degenerated disc is going to be very thin, or it will start thinning, as it dehydrates.  The disc itself will characteristically start to change.  As the disc dries out, it will start to weaken, it will thin down, and sometimes the disc will get little tears in it.  Those tears, called annular tears, can actually be seen on MRIs.  But in this particular model, you'll notice that the nucleus has migrated through the disc and it has done that because the disc is weakened.  You can think of a degenerated disc kind of like a piece of beef jerky.  A piece of beef jerky has been dehydrated.  A dehydrated piece of meat is very inflexible, if you bend it will break, and it may crack.  That's what a disc does as it dries out and weakens. 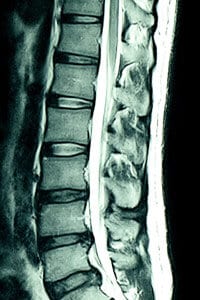 In fact, while still looking at the MRI, we can compare a dehydrated disc to a healthy disc. A healthy disc is very bright with signal intensity.  You don't really see it bulging out into the canal like you do the ones that are turning dark.  The dark ones are starting to thin a little bit.  Notice that discs that are dehydrated are actually bulging into the canal.  It's really important to understand that as the disc dehydrates, it weakens, and as it weakens it tends to bulge.  If it bulges enough it may push on a nerve. 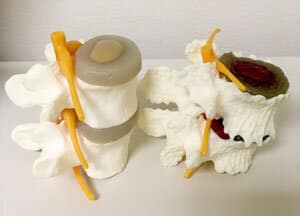 Degenerative Disc Disease may cause nerve compression, potentially resulting in symptoms like numbness, tingling, pain, burning, and maybe weakness in the legs, arms, feet, or hands.  Actually, any of the skeletal muscles can have weakness because of a nerve being pinched, resulting from a degenerated or a bulging disc.  We don't want the discs to thin down.  If the discs thin down, the vertebra above and below move closer together causing a narrowing of the openings where nerves exit the spine. A radiologist refers to this process as "neural foraminal narrowing" on an MRI report.

If we compare the thickness of the disc on the two of these models, we’ll notice that the thicker disc provides a wider opening for the nerve to exit the spine.  The one that has narrowed down is actually closing down on the space where the nerve exits.  The more a disc has thinned down, the smaller the opening where the nerve exits.

Fortunately, there are conservative, nonsurgical, drugless ways of helping degenerated discs.  That’s the type of treatment that we provide at Health 1st Wellness & Physical Medicine!  The treatment is very effective and it can many times get patients who are in severe pain completely out of pain.  A typical treatment for Degenerative Disc Disease in our office is called Spinal Decompression Therapy.  Dr. Randall Roth, D.C. is nationally certified in Spinal Decompression, and has included Spinal Decompression as a treatment option in practice for the last 17 years out of the 30 years he has practiced.

I’m interested In Learning More About the Non-Surgical Treatment for Degenerative Disc Disease Available at Health 1st Wellness & Physical Medicine. What Should I Do Now?

If you would like to find out more about how we can help with degenerative disc disease, and the pain or additional information about the condition, then don’t wait…Call our office at 501-881-4407!  We look forward to hearing from you!